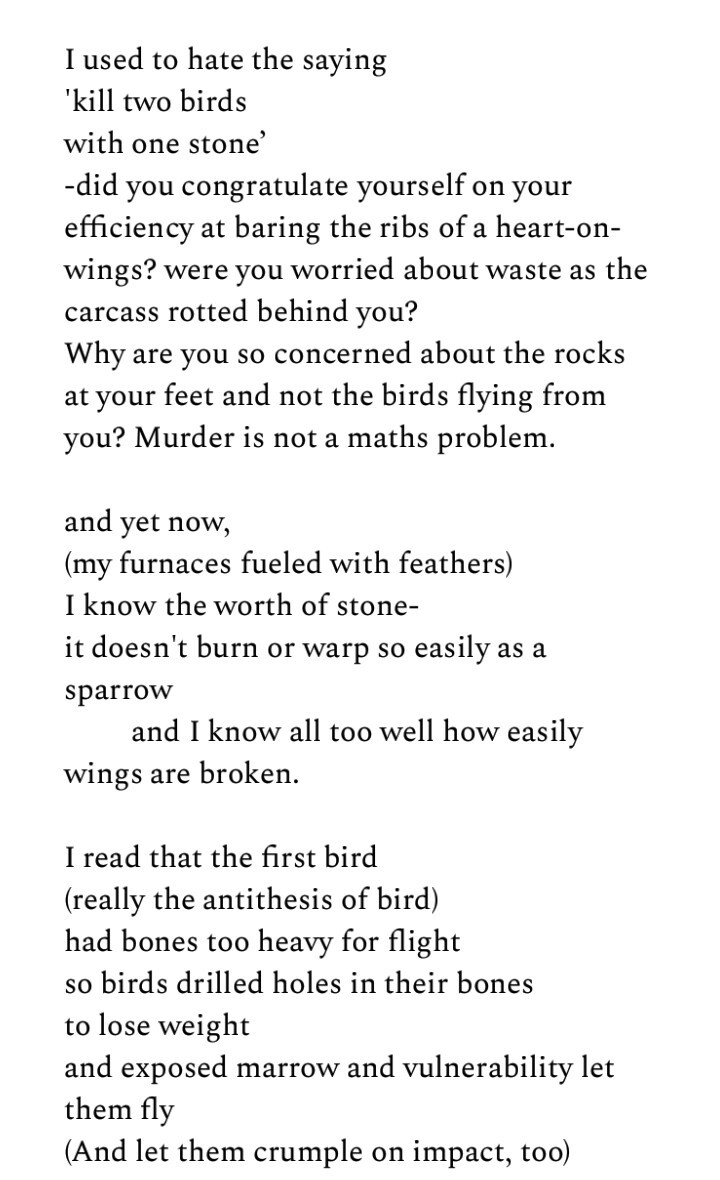 Some humble homes pasted along the way. Greetings exchanged with smiling faces there. Not long afterward a new sound approaching, crunching gravel, rolling up behind me.

A lovely young girl, perhaps nineteen, long brown naked legs bike a peddling. Hair jet black, long to her waist, wearing a sarong, split up the side, Shoulders bare and brown. Dark eyes of wonder, sparkling of youth. A radiant smile adorning a splendid face. We went for a time at my even pace, looking and smiling each in our place. Perfect teeth displayed.

I replied This response producing a pleasant laugh from the girl. In which I too joined in. She raised her graceful arm, one finger pointing up the road.

Indeed, more than one chicken roamed, Many chickens did and a pig or two, mingling free and doing their thing. We entered out of the bright daylight, into the deepest of darks, Like in a movie theater, when arriving late. Eyes adjusting slowly to what lay ahead. A few Island Beers later, I had acquired several new friends, The girl my invitation to the party of already happy people a little drunk on beer. The Beatles also had a tune or two. The Liverpool beat resounding down Tahiti way. Before the light did fail, I shouldered my pack and walked some distance from Chickens and Pigs.

Found the beach, hung my Hammock for the night. Built a small fire and opened a can of Spam delight. She appeared again about ten, looking beautiful in the new moonlight. Newly washed hair, still damp and smelling fresh of Lilacs, Or some such aromatic scent. I suppose even us if we let them. We retired then both to my hammock, A pretty neat trick if you can swing it. And we did. She was so childlike and yet, very much a woman grown.

There was no pretense shown, no false inhibitions rendered. These were not limitations of her culture. An open and free spirited people living passionately within each minute. It all felt more akin to a dream than real, All around me there was beauty, Loving and being loved without hurry, Free of guilt or even a single expectation. Living in that wondrous moment, of uncomplicated human splendor. Like some Garden of Eden surrender. A real life Gauguin painting.

In the morning, we swam in the sea, frolicked like kids having a day at the beach. Made love in the sand, I dozed in the sun. Upon awaking she was gone. I waited an hour or two, packed up my camp, shouldered my load and returned to the road. We sat in a grove of trees, among birds singing, in sight of the sea, Upon a Palm log and ate fresh bread and fruit. Drank strong black coffee French Roast I presume, nibbling some marvelous cheese. We tried to talk, but she understood little of what I tried to say, my French was nearly nonexistent, only adding to confusions sake.

She leaned her head on my shoulder, the way lovers do and tenderly held my hand within her two, As if not wanting to let go, Those gestures said all there was to say, And we savored each silent moment. We parted there, she on blue, rusty bike and me on "shanks mare", Off in two different directions, Each out into the depths of our own lives, Gone just like that. And yet, Indelible, never to be forgotten or replaced. Some days and nights, that young maiden of Moorea does still visit me, in dreams as real as can be. She never grows old, nor does the beauty we shared for that one brief moment in time immortal.

Someplace among the Islands of Tahiti there is a woman in her sixties, most likely a Mother, even a Grandmother yet living. I hope she recalls as fondly the American blond man with the big Orange Backpack, that in she met upon the road, near "One Chicken" and loved freely and completely for two days and a night, as that man does so fondly remember her.

Continue reading Lizzy Jul Grey May The Chicken Boy. This is how we are, a conversation; you never cared to call me something like my name. I never cared to see you in any way but under my boot with blood on your teeth. This is not a war that can be won with pickets and strikes.

You never apologize and I never want to hear those words come out of your mouth. It has seen us fight. It has heard stories. Only the stars act as referee, calling out which one of us died better. The hourglass broke, the sand mixing with the red clay, And you claim to know that his time is up. Please , you ask me, Let me win one last time. And I learn that breaking is easier than bending; And I learn how my name sounds on your lips. ConnectHook Sep They bank on debt, and make lament And flounder in their fogs… Kim chee does stink, but tastes so good Do have some more, oh comrade Mao.


Draw near! Upon your wisdom now we wait. The forces red you bravely led You staked your claim until they bled And brought their nation down. I criticize in strongest terms Your revolutionary thought. Our true Khmer Rouge was not a stooge of Kapital. His fame was huge for plundering their treasure.

Death or re-education! We ought to sow his rural seed for pure agrarian reform. Listen well and I will teach ya! Kim and Mao applauded. City folk are useless eaters glasses-wearing foes and cheaters! The Red dictator rose. Yet still they plotted in the blaze with dialectic deviousness. Shadow Puppet Mar Chicken Nugget. Am I afraid of me? Traveller in time Sep Black fear he sends it flying, Black care he drives afar; And creeping shadows sighing Before the morning star.

The birds of all the forest Have dear and pleasant cheer, But yet I hold the rarest The farmyard Chanticleer. Red cock or black cock, Gold cock or white, The flower of all the feathered flock, He whistles back the light! There was once a pretty chicken; But his friends were very few, For he thought that there was nothing In the world but what he knew: So he always, in the farmyard, Had a very forward way, Telling all the hens and turkeys What they ought to do and say.

Goose," he said, "I wonder That your goslings you should let Go out paddling in the water; It will kill them to get wet. Won't you come out to the meadow, Where the grass with seeds is filled? Dorking, "Then my eggs would all get chilled.

Dorking, "Can it be you do not know You yourself were in an eggshell Just one little month ago? And, if kind wings had not warmed you, You would not be out to-day, Telling hens, and geese, and turkeys, What they ought to do and say! For the night has thrice denied The glory of the Sun, And now, repentant, turns aside To weep what he has done. There's barley in the barley-field, And hay-seed in the hay.

The Clocking-hen sat on her nest, She made it in the hay; And warm and snug beneath her breast A dozen white eggs lay. Crack, crack, went all the eggs, Out dropt the chickens small! 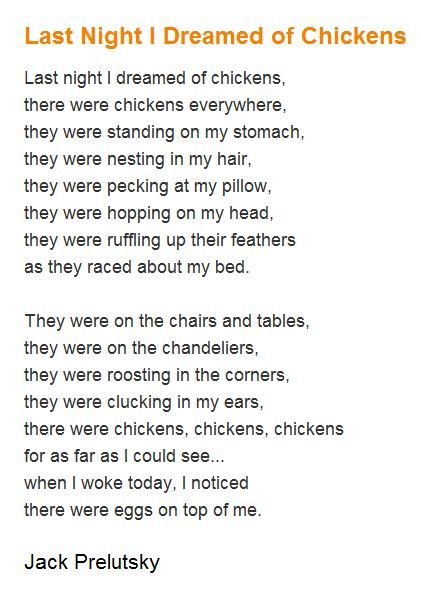 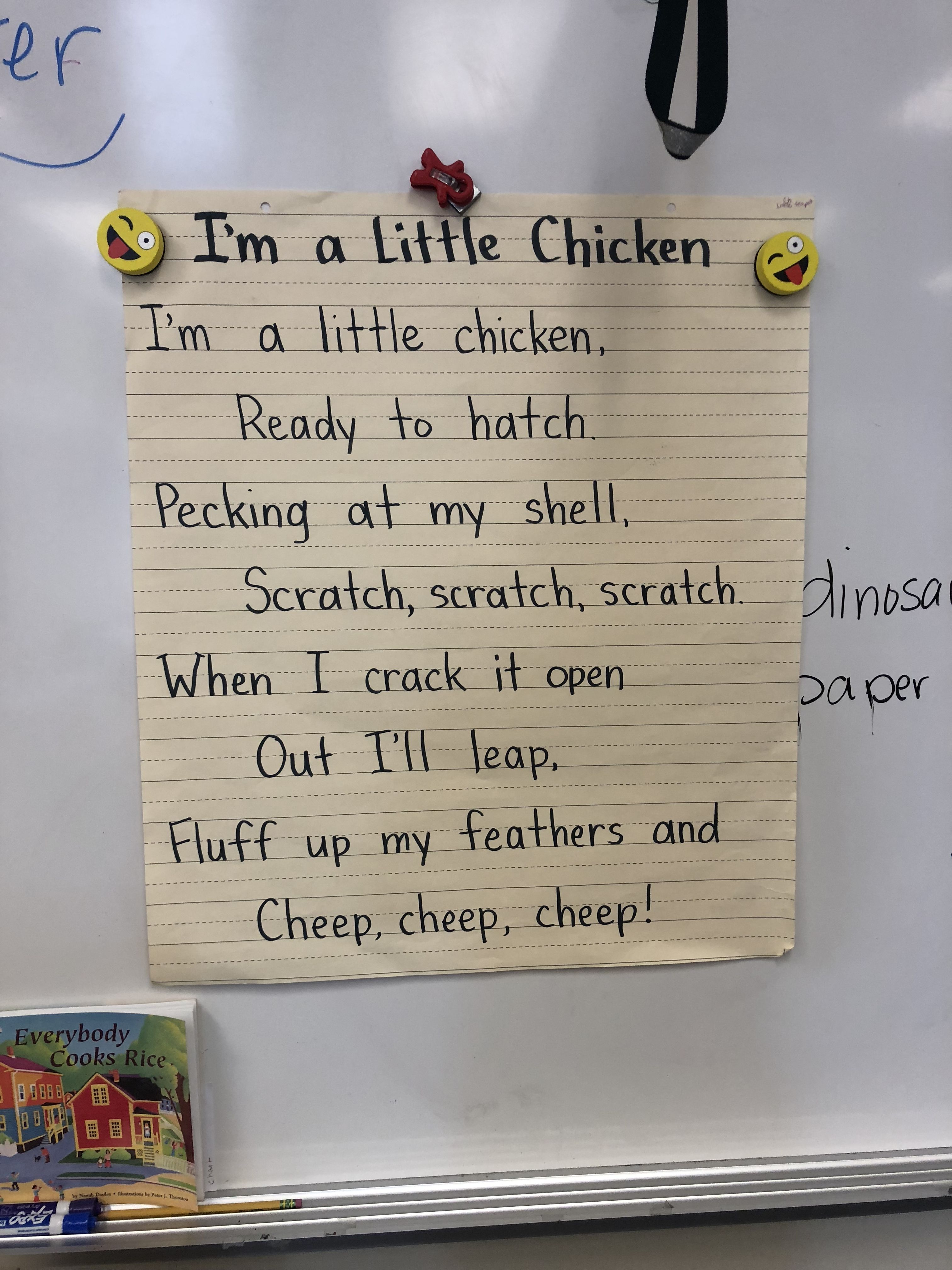 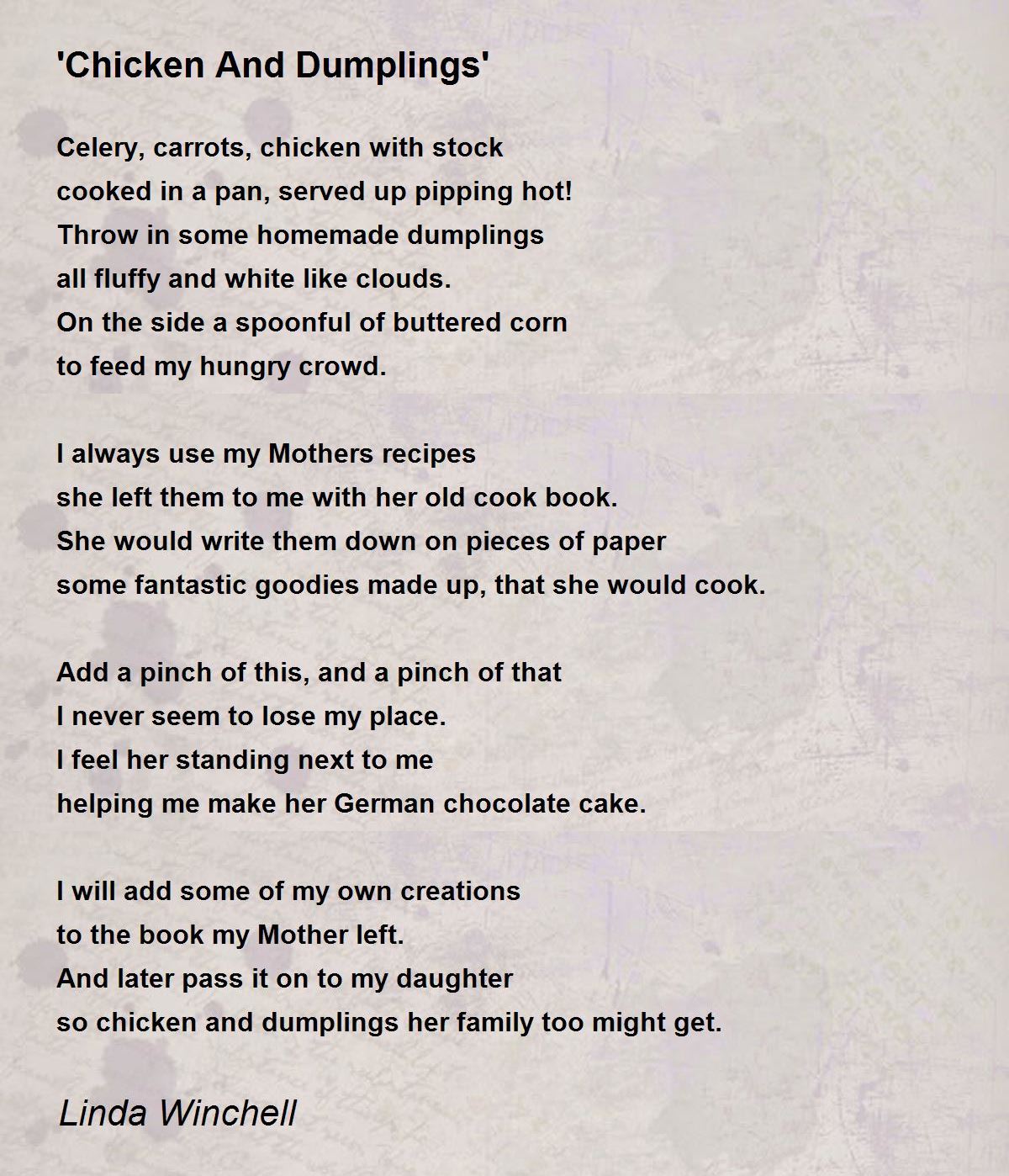 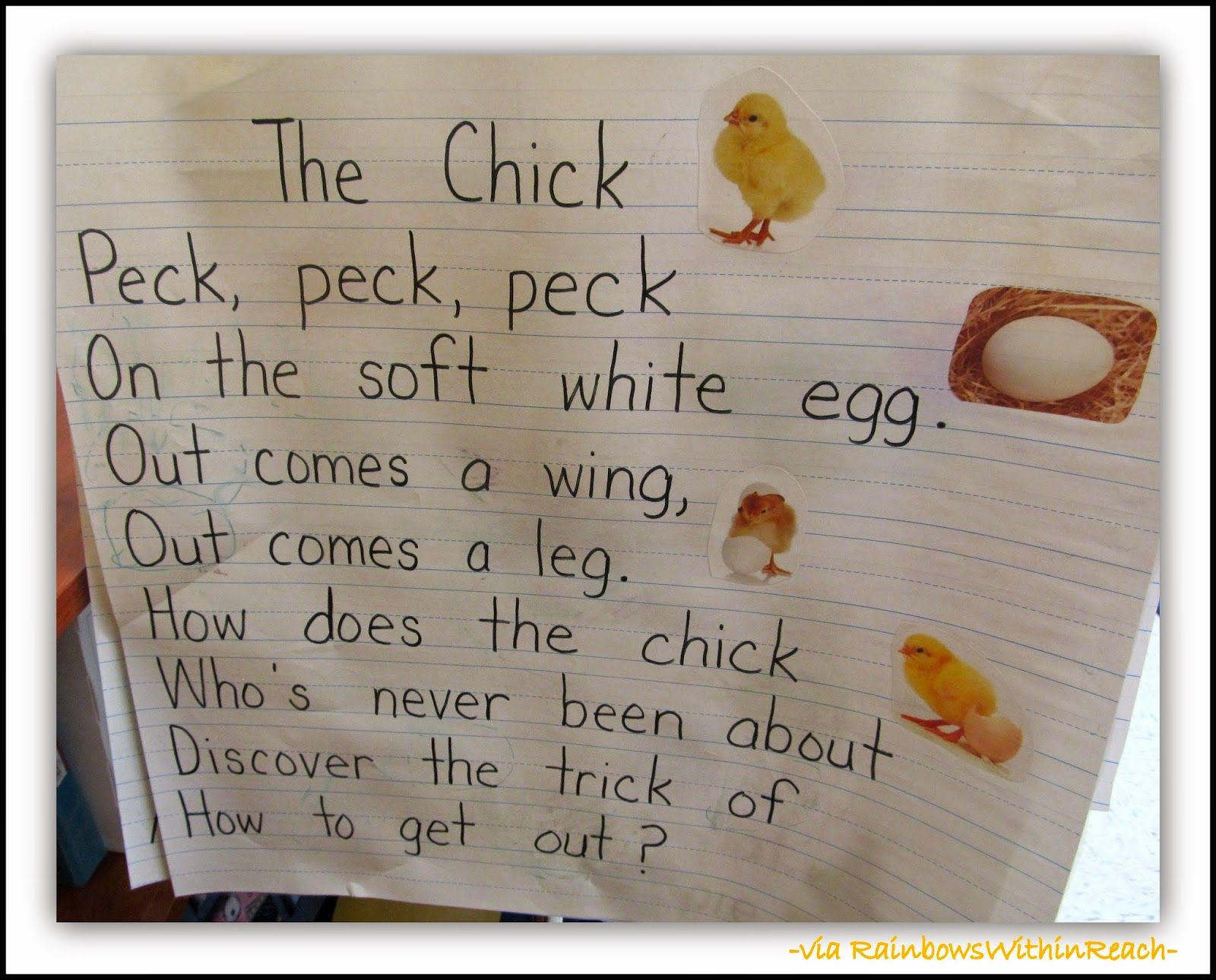 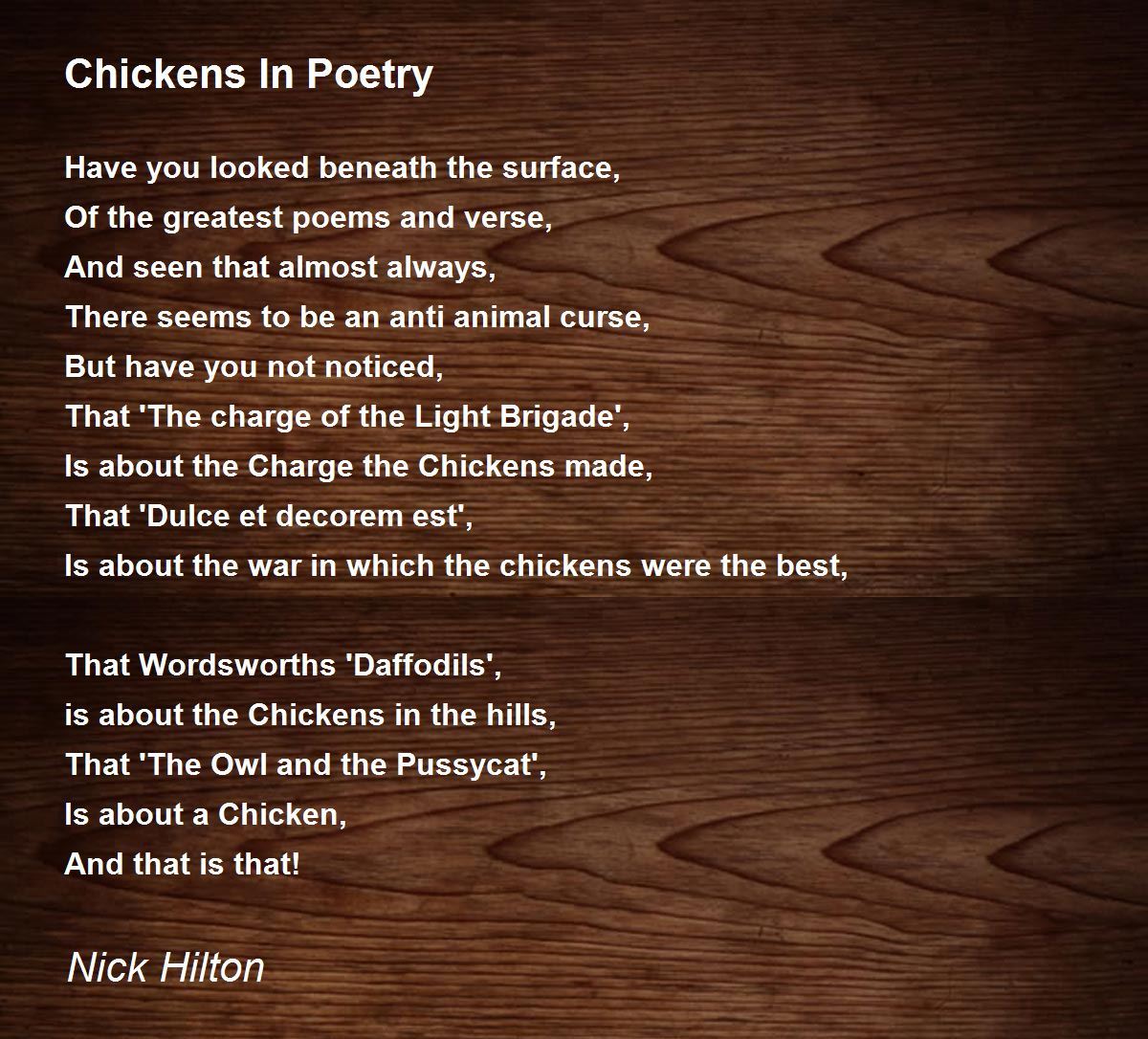